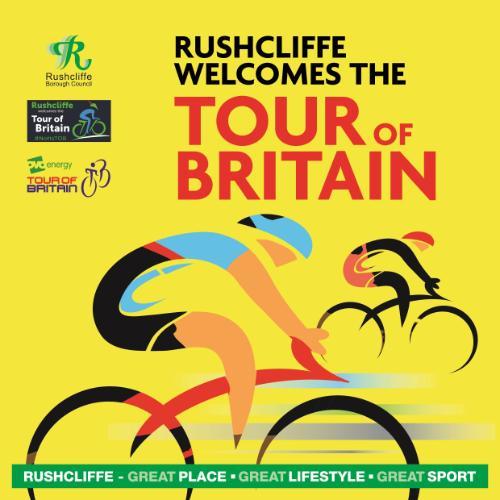 On September 8th 2018 the penultimate stage (stage 7) of the Tour of Britain cycle race is in Nottinghamshire. The route will pass through Plumtree and the surrounding villages. This is a prestigious annual event which will receive national television coverage on ITV4. The event is being actively promoted by both Rushcliffe Borough Council (www.rushcliffe.gov.uk/tob and Nottinghamshire County Council (nottinghamshire.gov.uk/tourofbritain). 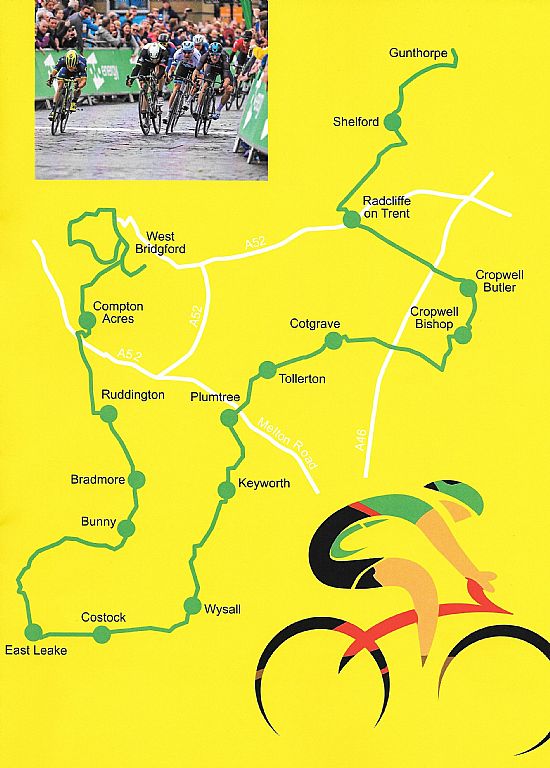 The route of stage 7 through Rushcliffe is shown right. Briefly, the cyclists will start at 10:30 from the croquet lawn on Central Avenue in West Bridgford and will arrive in Plumtree from Keyworth at around 11:14. In Plumtree the route is along Station Road, turning up Church Hill, across the A606 and onto Cotgrave Road in the direction of Cotgrave. The race eventually leaves Rushcliffe at Gunthorpe heading towards the end point in Mansfield.

Rushcliffe Borough Council is encouraging local communities along the route to support the event by ‘dressing’ the route, with flags, bunting, balloons and even old bicycles painted yellow reflecting the colours of the event – yellow and green.

The race is likely to attract many visitors to Plumtree, including spectators from other villages that aren’t on the route, cycling enthusiasts and those simply interested in the display. Visitors will probably be present for some time before and after the cyclists pass through and, since the route passes the Burnside Hall and Plumtree Church, both of these will be open on the day' Plumtree WI will be service refreshments in the Burnside Hall.

To encourage the competitors, ‘cheer points’ will be organised along the route and church bells will be rung as the cyclists pass village churches.

While the emphasis is placed on the sporting and entertainment sides of the event, there are some inevitable logistical measures that need to be taken to ensure that it runs smoothly and safely. Such things as:

There are full details on the Tour of Britain website: www.tourofbritain.co.uk

If you are interested in dressing Plumtree for the day, and have some ideas, please contact Mike Bylina or Mike Clark.

Route and Timetable in Rushcliffe

There will be a small number of road closures involving the surrounding areas of each start and finish location. These closures will be finalised well in advance of the race taking place and will be published on the Nottinghamshire County Council website (nottinghamshire.gov.uk/tourofbritain) including how long the roads will be closed for.

In between each start and finish there will be a "rolling road closure" system. This is where the race route, and junctions with access roads onto the route, are closed while the race passes through. The length of closure of the rolling road block depends upon how dispersed the riders are. Typically, the lead motorcycle instigating the closure is 15 minutes ahead of the lead rider. The closure then remains in place until all riders and race cars have passed through.