A large number of planes fly over Plumtree, some of them at 3000 to 5000 feet preparing to land at East Midlands airport near Kegworth, others at a much higher altitude. Have you ever wondered where they’ve come from and where they’re going to?

Well, an increasing number of aircraft are being fitted with ADS-B devices that continuously broadcast location and identification information. The flightradar24 website takes this information and uses it to update aircraft movements on a world map in real time; see below:

Click on the flightradar24 logo to open a new tab showing the planes currently flying over Plumtree. Click on a specific aircraft to bring up details of the plane and its itinerary.

Flightradar 24 is currently available online and for iOS (iPhone, iPad, iPod Touch) or Android devices plus for Windows and Mac OS computers.

Visit the flightradar24.com website to investigate the full set of features supported by this excellent timewaster. 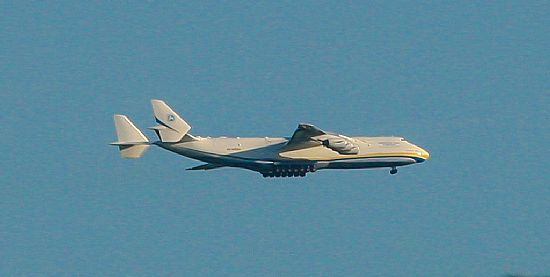 The photo on the right is of the Antonov An-225 plane as it flew over Plumtree on its way to East Midlands Airport from Riga on June 12th 2014.

The Antonov An-225 is the longest and heaviest aircraft ever built with a maximum take-off weight of 640 tonnes. It is powered by six turbofan engines and has the largest wingspan of any aircraft in operational service.