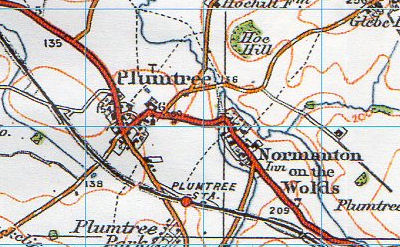 Plumtree is a small village with a population of around 200, located 5 miles (8 km) south-east of Nottingham, just off the A606 between Tollerton and Keyworth.

It features a church dedicated to St Mary; a popular village hall; a pub called The Griffin; a premier league cricket team; and the award-winning Perkins Bar & Bistro and Carriage Hall.

Plumtree is bordered by several other villages, namely, Edwalton, Tollerton, Stanton-on-the-Wolds, Keyworth, Bradmore and Ruddington. Other nearby villages include the three "Ws": Widmerpool, Willoughby-on-the-Wolds and Wysall.

This website has been created to provide a platform to showcase Plumtree’s social history.

Plumtree's population has remained fairly constant during its transition from an agricultural village to a residential one. At the beginning of the 20th century, the village was predominantly an agricultural community with mixed farms (i.e. having both crops and livestock).

In addition to the farmers and agricultural labourers there were tradesmen such as the blacksmith, miller, saddler, butcher and carter, a lot of whose work was agriculture-related. They lived and worked within the village and many of their homes and the farm buildings remain today. There are now only two working farms in the village.